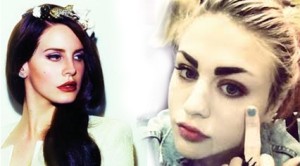 There are several people that I think are fantastic in the famous world… One being Frances Bean Cobain, she’s the daughter of the late Kurt Cobain and Courtney Love.
There’s not enough time to explain why I think she’s amazing. But there are examples I can share with you. For now, I’ll share one because this was recent and shows that she’s nothing like her mother (thank God).

Recently Lana Del Rey did an interview with the British newspaper, the Guardian. In the interview the topic of Amy Winehouse and Kurt Cobain came up and the first thing that comes to mind is their deaths and overdoses. I don’t blame her considering that’s the one thing people talk about before getting into other subjects of the artists. It’s sad to say but true.
Well, that’s where she started; basically saying she wouldn’t mind being a dead young artist. In exact words from the article, “I wish I was dead already,” Lana Del Rey says, catching me off guard.  She has been talking about the heroes she and her boyfriend share – Amy Winehouse and Kurt Cobain among them – when I point out that what links them is death and ask if she sees an early death as glamorous. “I don’t know. Ummm, yeah.”
To be completely honest, I doubt she started the conversation like that. People tend to say your stock and art becomes popular after an artist dies. Is that where she’s going with this? No, according to the interview the reason why should would like to die is because she’s just tired of the entertainment life. But it’s a life where she can make music and that’s what she loves. Obviously, not in those words, Rolling Stone Magazine quoted it the best… “I don’t want to have to keep doing this, but I am,” she told the paper. And by “this,” she said she meant “everything.” “That’s just how I feel,” she said.”
In a recent interview with Rolling Stone about the Guardian interview, stay with me that’s the most complicated it’ll get. She told RS that she didn’t even want to do the interview with the Guardian. The author said he was a fan and he wouldn’t back off, so she gave in and did the interview. Talk about peer pressure, not cool dude.
After the interview she contacted the writer and told him she wanted to retract some of her statements about the whole death, Kurt Cobain/ Amy Winehouse conversation.

Before finding out about the part of Lana Del Rey wanting to retract what she wanted to say about young deaths in the entertainment world… Frances Bean Cobain read the article Lana Del Rey did and took to twitter. Now before you start thinking, “Why does she have to go on twitter and get into other people’s business?” the way she did it was classy. Well, I thought it was.
Frances Bean Cobain went on twitter and started voicing her opinion on the matter. Saying things like, “I’ll never know my father because he died young, and it becomes a desirable feat because people like you think it’s ‘cool.’ Well, it’s fucking not. Embrace life, because you only get one life. The people you mentioned wasted that life. Don’t be one of those people. You’re too talented to waste it away.” It wouldn’t be social media without a little bit of drama. Fans of Del Rey tweeted back a Bean Cobain saying to back off and that’s the nice way to say it. Bean did respond with a nice note saying she’s not ganging up on Del Rey about it but expressing that it’s a topic that should not be taken lightly. She’s talking from personal experience and for someone being talented, having family and friends all in which would miss her greatly if she were to take her own life.

After tweets were posted from Bean about the Del Rey’s article, that’s when we find out about Del Rey wanting to take back her comments from the interview but the writer didn’t for some reason.

Frances Bean Cobain is right about this subject, I don’t need to back her up or tell you the reasons why she is. Although she offers a different perspective on the issues, we [fans] of the music experience it on another level, especially when connecting to an artist/band. The aftermath of the tragic death leads to family and friends’ being upset (obviously) but it hurts the people they touch with their music. The impact that person could have done on the world and not just musically but taking their status and using it for the good too. Charities, giving back, standing up for the person scared to speak about things like bullying, etc. using their energy and applying it to something people need.

Was Frances Bean Cobain out of line for voicing her opinion? I don’t think so; I think it takes some guts to speak out on a serious topic like this. If it was her mother talking then I would think she’s dying for attention.