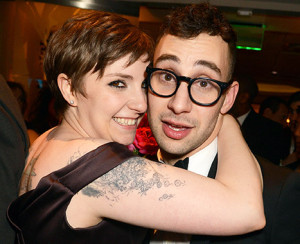 Jack Antonoff, the guitarist from Fun and Bleachers, said in a recent interview that he can’t wait to have kids with his girlfriend, Lena Dunham. Lena is the creator and main character of the HBO series ‘Girls’.

Jack said that the couple, who have been dating since 2012, are not ready for kids at this moment, but adds it’s “definitely on their future agenda.”
He explained, that he’s 30 and he’s no longer talking about the future because he’s living in it.

Lena has said in many interviews that she won’t get married until same sex marriage is legal across the U.S. (I love her).

Read the full story on how they met and more about the couple here.