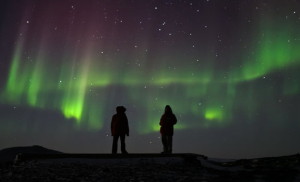 Think of the craziest place you’ve ever traveled, and then prepare to be topped! And no, I’m not talking about Daytona Beach during spring break.

Seasoned travelers may tell you they’ve been “all over the world,” but I bet that few of them have told you they’ve been to the seventh continent… You know, the one tucked way at the bottom of Earth? Well, in case you’ve forgotten your geography, it’s Called Antarctica! And that’s exactly where filmmaker Anthony Powell has spent at least 100 months of his life!

In order to truly appreciate why his film, “Antarctica: A Year on Ice,” is so significant to nature enthusiasts and filmmakers alike, you have to understand that it documents a full year of Antarctica (as the name implies) and as the seasons change, so does does the continent…drastically! And the winter months can be very violent, which is why few people have ever captured it on video. Until now!

In addition to the breathtaking time lapses of vibrant auroras, firey nacreous clouds and and starlit skies, we get to meet the people. Not the scientists and geologists, but the average Joes! Women and men, just like you and I, who were just adventurous enough to apply for a job in the warehouse, maintenance department, and even as a dishwasher (scientists and warehouse guys have to eat too, right?).

Casey O’Brien happens to be just one of those guys, and I got a chance to speak with him too! In addition to being in the film, Casey also took on the role of representing Anthony at the 38th Cleveland International Film Festival…That included being present for the Q & A, and to truly appreciate what he did, watch the video below of the incredible line that formed for just one of four screenings…And by four, I mean at least ten. Each screening needed two or three separate theaters to accommodate, so seriously Casey, thank you.

After you watch the video (and the trailer posted just beneath it), don’t forget to listen to the first part of their incredible story.

The line for “Antarctica: A Year on Ice” at the 38th Cleveland International Film Festival

Trailer for Antarctica: A Year on Ice