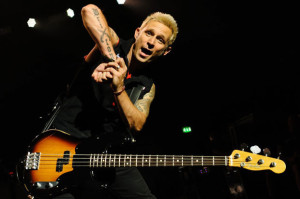 Mike Dirnt, the bassist of Green Day is adding film producer to his job title. He will be producing an independent film called ‘Crickets’ it’s about a relationship of two estranged brothers, one of whom is dying of an illness. Mike said this movie about brothers and illness is really relatable to him and “feels very real”.

If you remember back in May Mike’s wife Brittney, announced she was diagnosed with breast cancer and has started treated me for it. They announced it through social media, and could be one of the many reasons why Mike was able to relate to this movie; Even though it’s about two brothers.

Mike Dirnt does have history with the writer of the movie, Alfredo Botello. Apparently, their friendship is 20+ years strong.

No details at this point on the release date for the independent film or where it will be shot.

This is not the first time Green Day has tapped into the entertainment business. Other than music obviously; they’ve also done a series of musicals off their ‘American Idiot’ album.