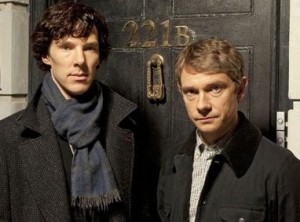 Sherlock Holmes fans, here’s an update for you…

Benedict Cumberbatch and Martin Freeman will repeat their roles as Holmes and Dr. Watson for another season of Sherlock.

Production for the next season will start later this year and there will also be a special following the 4th season.

Production for the special will start in January 2015. No information on what it will be about or what makes it a special… But it DOES mean we’ll get 4 new episodes instead of 3! I don’t know about you but I’m pretty geeked out!