“We wanted to save the world, but at what cost?” that’s how former Planeteer, Linka, started her press conference accusing Captain Planet of drugging her and sexually assaulting her back in 1992. She is the 4th Planeteer to publicly accuse the conservationist and super hero of sexual abuse.

“He wanted to do a lot more than bust pollution down to zero,” Linka went on to say. Linka, a former Soviet, has publicly struggled with substance abuse for years.

Earlier Tuesday, Kwame, an African Planeteer, turned to an internet blog, claiming to have a similar encounter in the late 80s. “I never went to police because I didn’t know who to trust.”

Kwame wrote that Captain positioned himself as a mentor.  There were even talks of Captain sponsoring an NPO to help conservation efforts in Zimbabwe (Kwame’s home country). Everything was eventually set up, but when troubles arose in late April of 1989, Captain was noticeably absent. 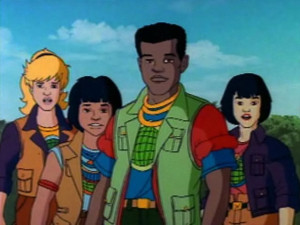 It wasn’t until November that Kwame saw Captain Planet again. He said he wanted Kwame to help with efforts on a global scale, and would need to meet in Vancouver. Kwame said he flew there at Captain’s behest, and Captain asked him to meet at his hotel, where they had dinner.

After dinner he asked me back to his room, and I went. But I stopped myself at the door. “I’m exhausted,” I said, begging off. His eyebrows went a little funny.

“Exhausted?” he asked, and it was clear he was trying hard to keep his temper in check. “After all I’ve done for you, that’s what I get? I’m exhausted.”

He waved both hands in front of my face, silencing me. Then he gave me the dirtiest, meanest look in the world, stepped into his suite, and slammed the door in my face.

Ma-Ti, the first of the Planeteers to step forward, tweeted after Linka’s announcement, “RIP Suchi, justice will come.” Referencing his 1998 memoirs where he revealed the sexual abuse him and his pet monkey, Suchi, endured by the hands of Captain Planet. “In retrospect, yeah we shouldn’t have trusted a crystal blue super hero, but when you’re in it…it feels normal.”

Dr. Barbara Blight, an eco-villain for much of her career, gave a quick word to NPR, “yeah, we polluted the earth but we always cared about those kids. Some things are more dangerous than acid rain.”

Wheeler, the only Planeteer who never publicly spoke out against Captain Planet, took his own life in August of 2007. “We never spoke about him with each other.” Ma-Ti said to a local newspaper back in ‘07. “When we were together we just tried to forget about Captain Planet. I saw the pain in everyone’s eyes, we never talked about what we had to do to get those rings.”

NBC and Netflix have shelved their respective projects with Captain Planet.