People (as in humans) enjoy sitting on a couch with a beer. The trouble is, sometimes people become so engrossed with their TV or movie, they forget they have a beer. This is why MOVIE DRINKING GAMES exist.

Apps like Shazam! embody the two screen experience. Advertisers utilize the app to encourage TV watchers to “shazam your TV” meaning the app “listens” to the advertiser’s commercial and pulls up more in-depth content on its browser. More app’s should be utilizing this technology, minding the fourth amendment to the United States Constitution. That is, as long as the user is aware they are being listened to, and still agree to continue. (Thanks, Snowden.)

Here’s an even better use of this technology, and a handy roadmap for Netflix to follow (after they pay up, of course.)

Without further ado, I present… 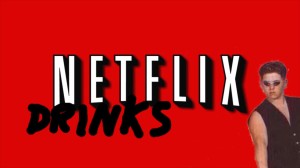 Netflix has a lot of licensed content being distributed through a syndication network, known internally as “Netflix Streaming.” This a good thing, nay, a GREAT thing. Netflix is doing the legwork, making contact with the owners of this content, getting the lawyers involved, and getting the go ahead to give all this glorious content away for a low monthly fee. Then, they stream it to various media platforms like Playstations, Web Browsers, Smart TVs and a netflix app.

Currently, the Netflix App has the same content as other platforms, and can be synced (start a show on your TV, finish it on your phone.)

So, why not allow a user to run the app simultaneously* on two screens, such as… oh… I dunno… a TV.

*This is where things start to become technically difficult for my developer homies at Netflix. Don’t worry, I got you.

When logging into a device that is located in the same room as a larger screen, the app will “listen” to the TV (remember how I brought up Shazam!?) to recognize the audience is engaging with Netflix on a two screen experience. Then, the user can operate two netflix experiences at the same time, allowing the “netflix user cap” to ignore a new user signing in.

Now, we have integrated a second screen. If none of this made sense to you, then just trust me. People aren’t allowed to lie on the internet.

People aren’t allowed to lie on the internet.

Tv Shows and Movie drinking games vary, but the common thread is memorizing a few rules, watching a movie, and drinking every time a rule is “broken.” For example, if we were watching Die Hard, we would take a drink every time Bruce Willis’ character swears (and we’d clearly get drunk quickly.)

With the advancement of the two screen experience, it’s time to bring movie drinking into the 21st century.

No more forgetting the rules!

Select the movie on your large screen. Press Play. The app listens to the show/movie, and tells you when a drinking rule has been violated, and encourages you to “take a drink.” Invite friends over to take a swig every time Frank Underwood double knocks.

Bonus: When you play this drinking game, you know you will never be drinking alone.

This game is in production, but we need your help.

We’re working with a team of developers to make this app for you, our faithful audience, but we need your help. Coming up with rules for all of these games is the hardest part.

Who has the time to get drunk and watch movies all day?