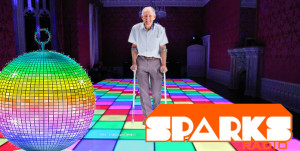 Dennis, a modest man of 76, has just been discharged from his 5th hospital stay in the last 72 hours. Dennis admitted that he has been listening to K. C. and the Sunshine Band’s “Get Down Tonight,” nonstop since it’s debut in 1975. He goes on to say, “the band always gave the best advice. My only regret was misinterpreting the part about love.”

Dennis was first struck with what he calls “confusion,” in 1973, after a knife fight that took place near a salad buffet line. He was struck on the head with salad tongs in such a way that he was rendered irreversibly confused. He tended to slightly misinterpret lyrics ever since. Family members have monitored him around the clock, but it became more difficult with each passing year. As his obsession with “Get Down Tonight” grew, his wife’s patience diminished.

His wife claimed, “That fucking band, K.C. and the Crackheads or whatever! They told him to do a little dance and make a LITTLE love. Dennis rarely danced but he got with all the neighbors! His damn confusion was always at it again!”

Dennis may not stop listening to his favorite song anytime soon, but he did have this to say about love: “my appetite for it is insatiable.”