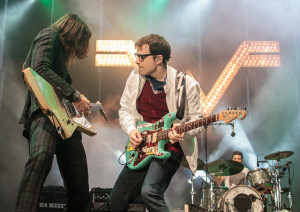 Get ready to do a fan girl scream because Weezer has announced that they will release their 9th studio album this September!

The album is titled, “Everything will be alright in the end” and if you’re a fan of their Blue Album and Green Album, well get this… The producer of those albums, Rick Ocasek (he’s one of the members of the Cars), will be doing this one too!

The teaser is of their new tuned, ‘Return to Ithaca’ “which features crunching triplet snare rolls and furious nerd-metal riffing.”

The album is supposed to sound like the early days of the band with new stories from today. Basically, their old school sound with 2014 stories. Weezer’s drummer Pat Wilson did a interview with Entertainment Weekly and said this… “If you took the Pinkerton band and then play all the other records – that’s what we sound like now,” he says. “Bombastic, loose, kind of booming. This record sounds like it’s going to have the tight structure of Blue Album with a little bit more abandon like Pinkerton.”

Weezer will be headlining Riot Fest this year and rumor has it, they will only be doing the ‘Blue Album’. Can’t wait!