Finally was able to watch ‘Girl on the Train’ today and can do a complete review for you! Just a heads up, there’s no spoilers in here. Just the basics of both book and movie.

I read the book and it wasn’t bad. It was pretty good, the reason I gave it an average score was because I was able to predict the ending. Not to a ‘T’ but I knew basically what would happen.

The book is a thriller and starts off slow, but if you read the book again it goes by faster. Three main female roles in a story… That’s freakin’ awesome! But when you’re getting use to the characters, the beginning of the book can be hard. You have to keep the three girls straight, even when the chapters are labeled with who’s talking. Once you get to know each character, it makes it easy and you won’t have to think about it.

Overall, the book was an easy read and was intense at moments. It left you wondering and wanting to finish it, if you like mysteries, you’ll be into this one. 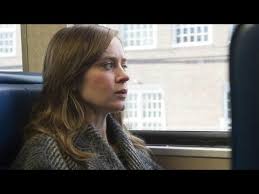 Honestly, there are not too many movie/book combos that I can say this about but the movie was pretty much exactly like the book.

I will say, holy moly Emily Blunt did an outstanding performance for her character. Talk about a challenging role! I was very impressed with what she did with this character as well as bringing this character to life.

The movie, in my opinion felt a lot like the book because of the flow. It moved a little slow, but when it hit with the thriller scenes, man did production bring it!

That’s another thing about the movie… It was VERY graphic. The book had details but the movie took it a step further. At one point it was like, “really? You had to take it that far?”

It was a good movie, but I wouldn’t spend the full theater price on it. If you waited for it to come out on Red Box, you wouldn’t be mad.