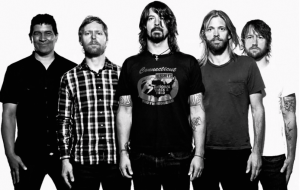 A few months ago we talked about how Dave Grohl’s home state, Virginia was trying to figure out how to get Foo Fighters to play there. Well, they found a way. Foo Fighters are playing a crowd funded and fan-organized show in the near future and front man Dave Grohl thinks these kinds of gigs could be how touring will be done in years to come.
Dave said in a recent radio interview, “We’ve been a band for 20 years and it’s time for us to start going to the places we’ve never been… I love all of the places that we’ve been, and all over the world we’ve built these amazing fan base audiences, but I love going to places we’ve never been.”
There was a open campaign created by a dude named, Andrew Goldin. Basically, if he got 1,400 tickets sold at $50 a pop it could happen. He also made a promise to donors that they will only be charged the $50 fee if the concert sold out. If the concert didn’t happen then they would keep their donation. A few businesses in Richmond, Virginia helped by donating $5,000 and of course, the Foo Fighters heard about it and decided to play.