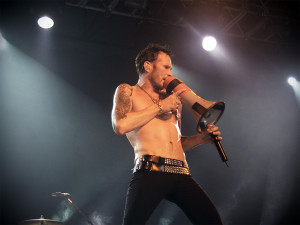 Scott Weiland left Velvet Revolver about 6 years ago and so far the band hasn’t found a solid replacement for him. Yes, they’ve had singers here and there but no one that would replace him full time.

Scott Weiland did a recent interview with a newspaper ‘La Presse’ and claims to have no problem with the band. He even called them [Velvet Revolver] up to suggest an idea for shows to do together in a few months.
Here’s where I don’t know if he’s being a D Bag or not… He says “We are on good terms, but I do not want to be a member of Velvet Revolver full time. If possible, I would like to only play at festivals, you know, to make easy money.” What?? Are you serious? When I read that I felt like he’s low on cash and needs some quick money. Maybe that’s just me. I could be completely wrong, it’s Scott Weiland, how could HE be low on cash?

Slash has warmed up to the idea of having Weiland back, that if he were to ever come back he [Slash] would accept him but there may be others in the band or crew that wouldn’t. It wouldn’t be like old times and there could be some tension.

But for “easy money” why would Weiland care, right? Was that a little harsh? Hahaha.

Here’s what Slash had to say in his interview with ‘The Toronto Sun’, “I can see Scott coming back, but I can’t see anybody accepting him. That’s sort of the case. It’s not a big deal and I don’t want to bad mouth Scott or anything. The whole thing is we’re looking for another guy to replace him. It just hasn’t happened. It’s dormant, but there’s activity under the radar.”

I hate to say this, but if you ever have a chance to see Scott Weiland… He is fantastic live! I saw him 4 years ago? When he was sober and it was for STP, I honestly hope Weiland gets his sh!t together because how awesome would it be if VR came back? OMG thinking about it makes me happy.