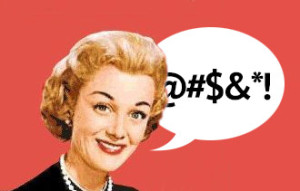 Swearing in front of your kids can lead you to doing some time! Well… It did for this chick.

27-year-old Danielle Wolf of, South Carolina was grocery shopping with her husband and kids last week, and her husband was loading frozen pizzas into their shopping cart . . . on top of loaves of bread.

So she told him to stop, because the pizzas were crushing the bread. And when he did it again, she let him have it . . . and dropped an F-bomb in the process.

Another woman in the store yelled at her for swearing in front of her kids, Danielle yelled BACK . . . and the woman called the COPS.

In the end, Danielle was actually ARRESTED for disorderly conduct . . . all for swearing in front of her kids.

She’s due in court next month.