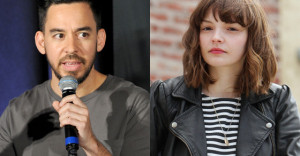 Mike Shinoda is making new friends in the music industry (I’m being totally sarcastic). Back in April, if you recall him saying this in an interview, “There’s so much stuff that sounds like Haim or Chvrches or Vampire Weekend that I’m full. The thing I’m hungry for is not that. I turn on the rock station in L.A. and it sounds like Disney commercial music.”

Chvrches decided to respond to that…. Iain Cook said that Shinoda’s comment was a “pointless dig”, while Lauren said she understood that he’s trying to sell his new record but she didn’t “like being called a corporate sellout by the man who wrote the theme music for the MTV VMAs.”

Linkin Park recently had an argument with Sublime with Rome over a weed/cop situation, and now they’re having one with Chvrches… Who’s next?

Read more about it here.