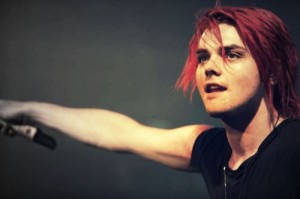 If you’re not happy, it can mess up other aspects in your life. Well I think that’s what Gerard Way former singer of My Chemical Romance was trying to get at.

He did a recent interview with NME and one thing I never knew about Way was that he’s a planner!
“I definitely knew I had the title of the second album before we’d even recorded the first… by the time I got to the third album, which didn’t have a name, I felt like that was the end. Basically the time spent after Black Parade was me fighting against that instinct, fighting against myself. The end of Black Parade felt like a very natural end. To go beyond that felt like betraying some sort of artistic command that I had within myself.”

Because he’s more of a visionary, he didn’t see the band continuing much longer. He basically said that once he starting thinking about his solo career and starting planning that out he knew the band had to end.

In 2006 My Chemical Romance released their “The Black Parade” album, Way felt that should be their last one. But the band continued for another six years and in those six years he tried convincing himself that it wasn’t over. That lead him to feel sick.

“I got sick physically and mentally because I didn’t listen to what my inner self said, which was when Parade was over, that’s the end… I never went past the third record because to me the third record was the pinnacle – it was the combination of everything we had learned on one and two but really taken to some crazy extreme.”

It’s great how honest he is in the interview(s)… He’s happy and healthy and even though My Chemical Romance was a great band, it’s best that they ended on top. Imagine if they still did My Chem and wrote horrible music? That would be disappointing.