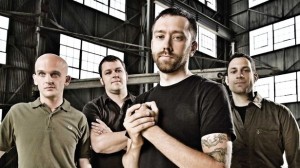 Rise Against will release their 7th studio album on Tuesday July 15th. They finally revealed the title to the new album and it will officially be called, ‘The Black Market’. The new album will be the follow up to their 2011’s ‘Endgame’ and it’ll end the longest break the band has taken in some time!

Their first single off the album, ‘I Don’t Want To Be Here Anymore’ is currently #13 on the rock chart. If you haven’t heard it, check it out below.