Hello all you SparksRadio peeps!! As most of you know I was one of the writer’s on TBS’ newest show, PEOPLE OF EARTH. Luckily for us, TBS has put the pilot on YouTube! I guess they feel everyone’s attention spans are too short or they’re taking the gamble that people who watch YouTube also probably cut the cable cord months (if not years) ago.

So, this is the pilot / first episode. This was written and produced months before I became involved on the show. When interviewing for the job I was given the script and this episode. As you can clearly see from this episode your mind can go hog-wild with ideas of where the story can go. That’s usually a must for a pilot. It’s definitely the difference between a good pilot and a bad pilot.

This episode was written by the show’s creator – David Jenkins. He’s a New York playwright who has a very kissable face. 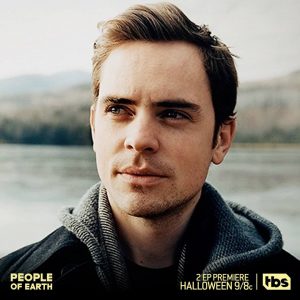 NOTE: I never kissed his face or any other part of him.

So David wrote this script and was all like, “this should be on TV.” Conaco, Conan O’Brien’s Production Company, thought the same thing. Then they called Greg Daniels (The Office, Parks & Rec) and were all like, “Dude, you should EP this.” Greg was all like, “Sounds good.” And that’s basically how it went. Eventually TBS was like, “Dudes, let us air it on our channel.” Now you all know the Hollywood secrets.

And be sure to catch the pilot again AND Episode 2 this Monday on TBS!!!!