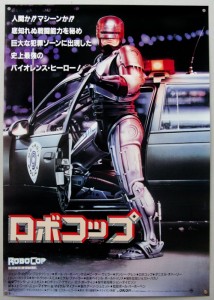 You read that right. It’s the match of the century. In Japan, propaganda is being released to help deal with an age old pervert problem, especially on trains. Who better to enlist for this campaign against perversion than Detroit’s own, Robocop. So think twice prior to squeezing a sweet and savory tuckus of the hottest hunny. It may result in a Robo-beat-down.

Read about and watch the commercial for this service here: Kotaku