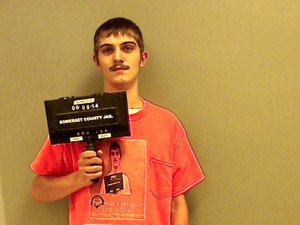 I love reading these stories but they some times lead me to believe that there’s no hope for our future.

19-year-old Robert Burt of Pittsfield, Maine was busted for drunk driving back in June . . . Had a mugshot taken . . . Got bailed out . . . And wound up pleading guilty.

He was sentenced to 48 hours in jail, from August 8th through 10th. And when he reported to the Somerset County jail, he was wearing a t-shirt featuring the MUGSHOT from his arrest.

So when the jail staff took his BOOKING mugshot, he’s wearing a t-shirt with his FIRST mugshot on it. And he’s got the same horrible mustache in both… It looks like he bought it from the dollar store and glued it on.

A co-worker made the mug shot t shirt for him, knowing he’d HAVE to get the second mugshot. It even said “Burt Family Reunion . . . sponsored by Bud Light and Somerset County Sheriff.” Because Robert has another relative in the SAME JAIL.

He wrote on Facebook that the corrections officers LOVED his shirt, and made sure it was clearly visible in his new mugshot. Yes, it was like a jail house photo shoot.

He’s very proud of himself too . . . he wrote, quote, “Probably the best mugshot ever haha.”

You can’t see but, I’m shaking my head.