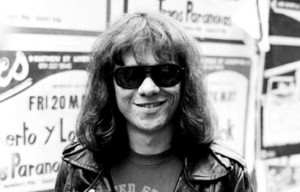 Tommy Ramone, the drummer of the Ramones and the last surviving member of the original band died on Friday night. According to several reports he had been suffering from cancer and was receiving hospice care when he died at home.

In 1984 Tommy stopped playing the drums for the band, he was replaced by Marky Ramone. Even though Tommy was no longer playing for the band he still worked with them throughout the years. Tommy was the writer to some of the band’s hits like, ‘I Wanna Be Your Boyfriend’ and Blitzkrieg Bop’.

In 2002, the Ramones was inducted into the Rock and Roll Hall of Fame. At that point most of the members were already rockin’ out in another world.

Johnny Ramone (John William Cummings) October 8th 1948 – September 15th 2004, after a 5 year battle with prostate cancer he died a month before his 56 birthday.

Non-original members are still alive such as, Marky, Richie, Elvis and C.J. Ramone.