There are lots of great reasons to attend your local film festivals, and seeing amazing films that you don’t always get a chance to see on the regular should be reason enough!

But for me, I’d have to say the thing I love most is getting the chance to meet people like Grant Baldwin, a documentary filmmaker with a true passion for filmmaking, and pursuing topics he truly cares about (and he’s a fellow tech geek).

Grant, along with his wife, Jen, are the two main subjects in “Just Eat It: A Food Waste 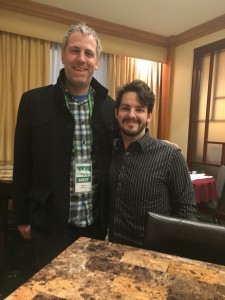 Story.” This documentary not only takes a look into the very real issue of food waste, but Grant and Jen take it a step further by challenging themselves with a little experiment: for 6 months, they ate nothing except discarded food!

Now, I know what you’re probably thinking: “…they ate trash?” Nope! Well…okay, sort of…but we’re not talking about leftovers from someone’s plate at a restaurant. This is actually food we (and grocery retailers…like, before food is even sold) throw out every single day because maybe it’s been in our fridge too long, or because it “looks funny” to us, or because it’s passed the “sell by” date…I won’t harp too much on this, because Grant gives a way better explanation of it than I could, but let me just say this: That “sell by” date is very deceiving, and it’s not the same thing at all as an “expiration” date. Listen to the podcast, and Grant will challenge you to find a single thing in the grocery store with an actual expiration date (hint: there’s only about 3-5 products).

You could easily say this documentary is a real eye-opener…I know it was for me. I certainly won’t look at food the same way again. 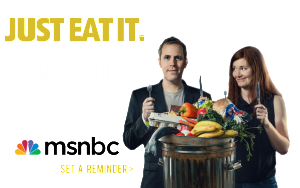 You don’t have to believe me though! You can judge for yourself! One of the great things about meeting Grant at the Cleveland International FilmFestival is that I actually got a chance to speak with him before the film’s U.S. release, SO, if you’re ready to see just how much perfectly good food we waste, what happens to all of it when it’s discarded, and how it impacts the environment, make sure you tune into MSNBC at 10 PM ET on Wednesday, April 22nd (but make sure you listen to my interview with him first…consider it a preview :)).

I should also mention it’s not all grim and grit. Jen and Grant created an extremely entertaining documentary and still managed to communicate a very important issue…That’s storytelling at it’s finest.

Thanks so much, Grant!