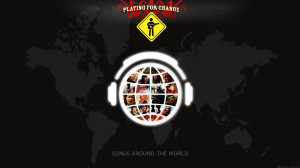 What does it take to start a movement? The same thing as everything else: an idea! I know, complicated stuff, right? And the very concept of a movement is something that moves us, and that’s exactly what happened to Mark Johnson…only his movement actually started because he stopped!

When it comes to public transportation, we could all probably exchange an interesting story or two…or ten…but I can bet that you probably didn’t walk away thinking “wow, that guy with the weird eyes holding a chicken in his lap gave me an idea!” (actually, it might…there’s a freebie for anyone who wants to expand on that). So what did Mark see on his way to the studio? A couple of performing street musicians. Monks, to be exact.

But as you can guess, it wasn’t so much what they were doing, as it was seeing the reaction of the people around him…and that’s what lead to “Playing for Change.”

So again, I’ll ask, “how does an idea grow from a documentary to a movement?” Maybe it would be easier to answer once the movement actually stops growing…or maybe Mark talks to me about it in my latest episode? Just an idea…This is a short one, too! So sit back, enjoy, and as Mark would say, “one love!”