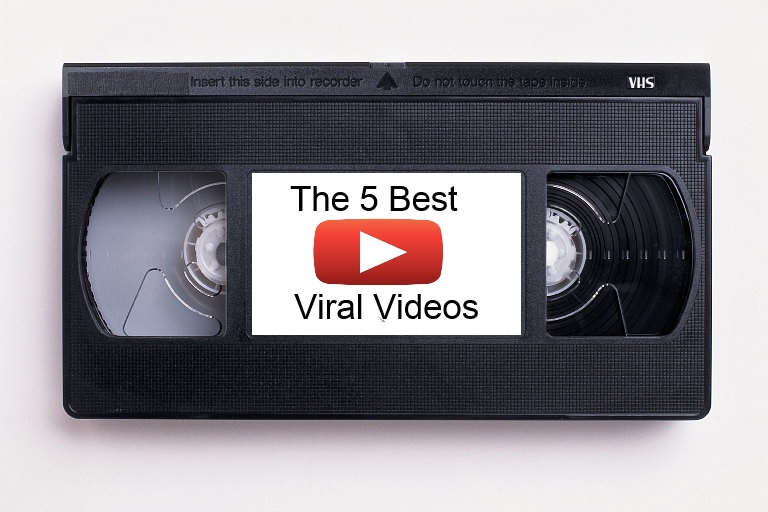 What, you might ask, qualifies me to pick The Top 5 Best Viral Videos? Well since I have no life (not kidding there), I have been known to be called Dr. Youtube by people as I always have something to show someone when they are near a computer.

Let me put a few disclaimers here. I hate “Charlie Bit My Finger”. I don’t care if it has over 700 million views. Maybe this stems from my dislike of children, maybe it has to do with the fact that the video just isn’t funny. For this reason Charlie Bit My Finger will not appear on this list.

Also, there are hundreds of viral videos, and I did my best to narrow it down to five. These five have three things in common: They have over 15 million views, they are funny, and they are my personal favorites. Sure you might not see one here, but consider Youtube (where the viral vid is born) has been around 10 years. Trying to make a list of 5 of the best, and funniest videos from that time is no easy feat. As someone with no kids, I can say it’s as hard as picking your favorite kid. Yes, viral videos are as important to me as children, that’s the connection I’m making.

So without further ado, here are the Top 5 Viral Videos…

#5: Grape Stomping Lady (15,214,960 views in 6 years): Youtube user yankeesfan22vt brought us one of the best and most painful vids to watch. We’ve all been there, stomping grapes, when the next thing you know you’ve got a mouthful of sod and your groaning like a dying goat. This video had such a reach that it was included in an episode of Family Guy. Gotta love it.

#4: Leeroy Jenkins (40,326,825 views in 8 years): As a nerd I love hearing nerd talk and this video is chock full of it. While the main line of “LEEEEROOOY JENKINSSS” is the highlight, you gotta love lines like “32.33 repeating of course” and “can you give me a number crunch”. Youtube user Leeroy Jenkins even went on to appear at The Spike Gamer Awards, and even shot a few commercials of him saying his classic line. This might be as close as we’ll ever get to The Simpsons “I Didn’t Do It” boy in real life.

#3: Alabama Leprechaun (23,926,696 views in 8 years): Local news seems to always bring out the best stories and the best people on the street to bring us these stories. User botmib brings us the story of a local neighborhood being terrorized by some sort of gold crazed Leprechaun. Best moment in the video has to be the amateur sketch. It scared me more than Jennifer Aniston’s acting in the original Leprechaun.

#2: Antoine Dodson (58,292,371 views in 2 years!): The original posting of this video was taken down, so it makes it all the more impressive that when Youtube user CrazyLaughAction re-posted this it got nearly 60 million views in 2 years! The subsequent song that was made from this has over 100 million views. My wife and I constantly say “well, obviously”, “you are so dumb” and “run and tell that, homeboy” to each other. You must check out Antoine’s website where he is currently running a kickstarter to get his own reality show. Check out his website and look back on the video below!

#1: Star Wars Kid (29,367,688 views in 8 years): I love this video. It’s been parodied on Family Guy, South Park, and Arrested Development to name a few. Youtube user Jim Love posted this 8 years ago, but the video has been floating around for longer than that. The Star Wars Kid Wikipedia page says it first appeared on the internet as early as 2003, and claims it has been viewed over 900 million times. I love this video because, who hasn’t picked up something and imagined it as a lightsaber? The re-edits that were done of this video where people put in actual lightsaber sounds and visual effects are awesome (make sure to check those out as well). Another plus is that the kid featured in the video took the bullying he received from the video and turned it into a positive as he now (a lawyer) helps to raise awareness of cyber-bullying and speaks to kids on the dangers of bullying others. Listen we all have videos that we would not want floating out there, this one is a great way for any nerd (like myself) to identify with our natural urge to be nerdy and save the world from imaginary threats. I salute you Star Wars Kid as a defender of those bullied, and as the best viral video of the last 10 years.

End Of The World: This classic from AlbinoBlackSheep is one of those videos you probably watched once, laughed at, and then moved on. However it’s racked up an impressive 8 million views in 6 years so I think that merits a mention. Plus, even though I’ve only seen it a few times, I still say “I am le tired” which means it has worked its way into my consciousness at least.

Dramatic Chipmunk: Sure, maybe not a viral video, but I love watching this from user cregets and I’m not alone as it has over 40 million views in 7 years.

What do you think? Do you agree? See something I missed? Comment below and make your case for the best viral videos with the hastag #bestviralvidever!