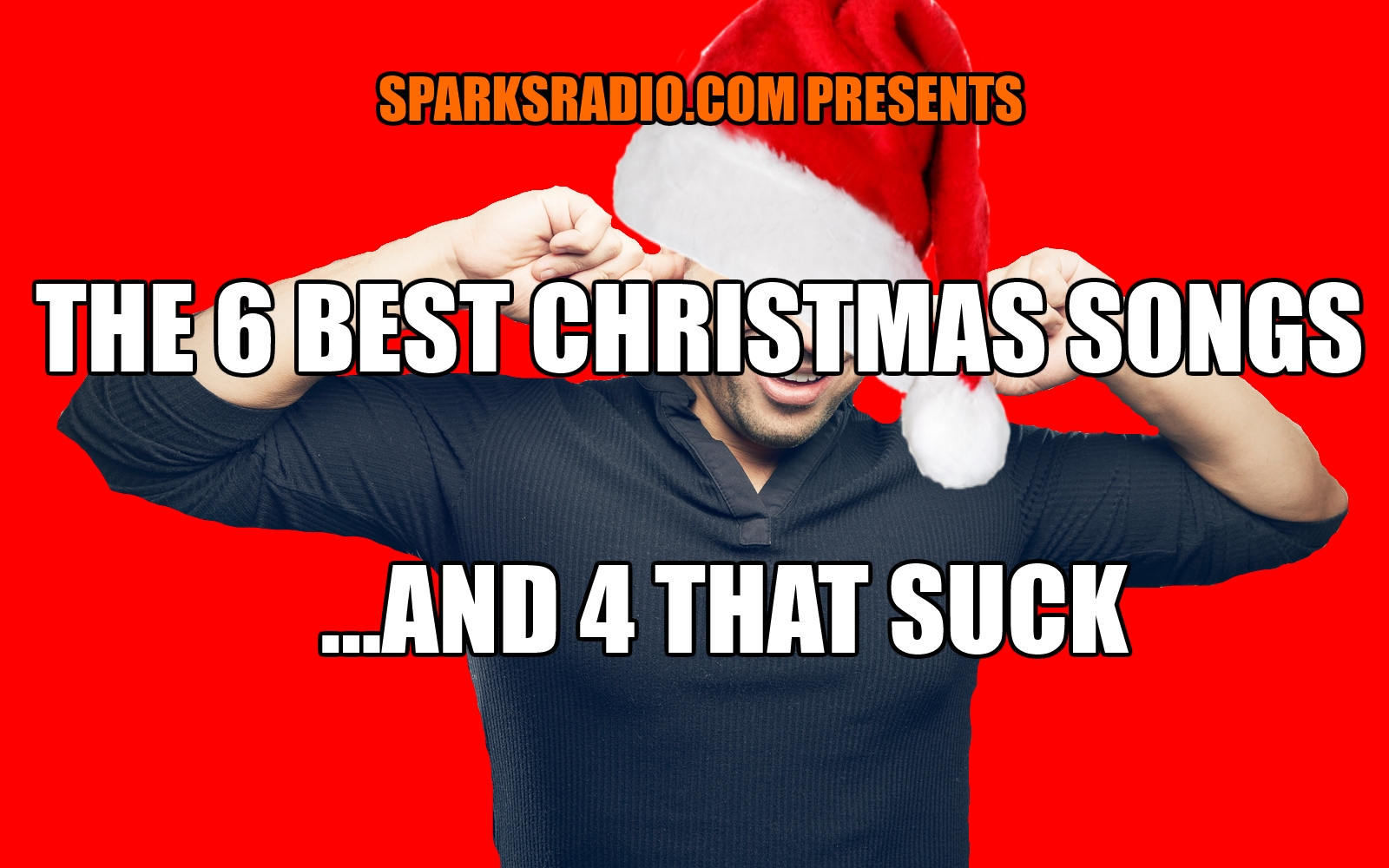 No matter what you do at this time of year, you cannot escape Christmas music. It’s everywhere. Radio stations devote 24 hours a day to the festive music. Stores have been pumping it through the muzak systems for months now. We’ve all been suckered into going and seeing a young relatives Holiday Pageant where we’ve been trapped for a few hours listening to tone deaf versions of “Jingle Bells” and “Frosty The Snowman”.

Just like mentioned in Part I of our Christmas Trilogy, we’ve come to Part II, where today we’ll tackle “The 6 Best Christmas Songs…and 4 That Suck!” We all have those Christmas songs that for whatever reason, never get old. And in fact we like them so much we could probably hear them during any part of the year. But the flip side to every coin are the songs that drive us crazy. The songs that make us contemplate swerving our car into oncoming traffic, or pour another glass of Christmas spirit just to get thorugh it. So here at Sparksradio.com we’ll set the record straight and get your holiday playlist started off on the right foot by giving you the best songs to include, and those that should be immediately deleted.

Best
#6: Joni Mitchell – “River”
This is one of those songs that you will never hear on Christmas stations. In fact most people probably haven’t even heard this, or if they have, never realized it was Christmas themed. I love songs like this. Like mentioned in Part I, in The Wonder Years Christmas episode, Kevin walks around his neighborhood thinking about Christmas and the past year while this song plays. It’s a perfect song for those moments of reflection we have at this time of year.
Best Line: “But it don’t snow here/Stays pretty green/I’m gonna make a lot of money/And then I’m gonna quit this crazy scene/Oh, I wish I had a river I could skate away on.”

Best
#5: The Ramones – “Merry Christmas (I Don’t Want To Fight Tonight)”
Again, another song you won’t hear on the radio this year. A fun, quick, punky Christmas song from The Ramones will instantly put you in the Christmas mood. I think there is a large correlation between not being on the radio, and Christmas songs that are actually good (how many times do we have to hear The Little Drummer Boy?). This is a fun one all the kids will be bobbing their heads to at the family party.
Best Line: I love you and you love me/And that’s the way it’s got to be/I loved you from the start/’Cause Christmas ain’t the time for breaking each other’s hearts

Worst
#4: John Lennon – “Happy Xmas (War Is Over)”
It pains me to write a John Lennon song as being on a worst list, but this song is awful. The repitiiveness, the horrible children singing, and the fact it literally plays every hour. I got in my car one day, it was playing; went to the store, it was on in the store at a different part; then when I got back in my car I changed stations and it was playing again. Unforgivable. 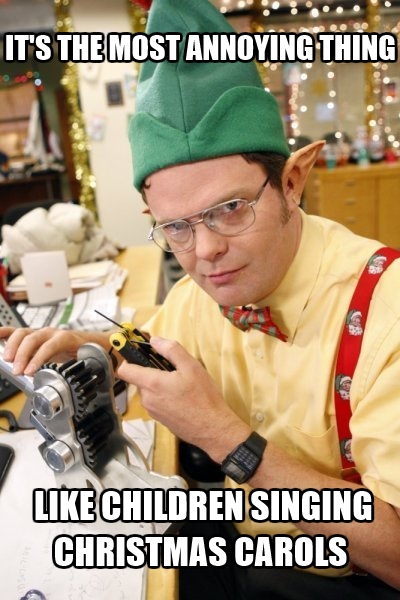 Best
#4: Trans Siberian Orchestra – “Old City Bar”
A deep cut by a popular Christmas band that is one of the best new original Christmas songs written. I love concept albums and this song tells the story of an out on their luck kid trying to get home, who then gets some help from an angel and an unlikely source and fits in perfect with TSO’s first record “Christmas Eve And Other Stories”.
Best Line: If you want to arrange it/This world you can change it/If we could somehow make this Christmas thing last/By helping a neighbor/Or even a stranger/And to know who needs help/You need only just ask

Best
#3: The Carpenters – “Merry Christmas Darling”
I’ve never really been able to figure out why I enjoy this song as much as I do. I think the late 70s’ vibe I get from it is the attraction. It takes me back to childhood Christmases in the 80s listening to this cassette in the old tape deck in my parents car driving to relatives.
Best Line: Logs on the fire/Fill me with desire/To see you and to say/That I wish you Merry Christmas/Happy New Year, too/I’ve just one wish/On this Christmas Eve/I wish I were with you

Worst
#3: Band Aid – “Do They Know It’s Christmas?”
Ugh, this song is everything bad about the 80s. Horrible music, bad lyrics. I understand the deeper message is the purpose but I really don’t need to hear this song anymore. And just a note to record labels, stop doing these massive artist collaborations. It does nothing to excite me. Butt-Head said it best in the Beavis and Butt-Head Christmas special when he said “this is one of those things where a bunch of rich people get together and ask for money.” Yeah, and the song sucks.

Best
#2: Vince Guaraldi Trio – “O Tannenbaum”
This one’s probably the most well known on this list. It’s of course from the Charlie Brown Christmas Special and it’s some awesome jazz. This one takes me back to those cold, snowy Michigan December nights sitting inside by the fire. It’s a song for those classy Christmas parties you may be going to.
Best Line: No words in this one, but that Bass Line certainly does rule.

Worst
#2: Wham! – “Last Christmas”
Hey guess what, she left ya bud. Get over it. Nothing’s worse than a guy whining about a woman leaving him. Then the song does well so other artists decide to cover it?. First off, this song takes all the horrible themes from the 80s and then multiplies it by making it about a woman leaving you at Christmas. Does anyone truly enjoy this song? I can’t see how anyone could. If the love of your life left you at Christmas, would you want to be reminded of that fact by this drivel?

…and the number 1, Worst Christmas song…
Mariah Carey – “All I Want For Christmas”
Again, this track was probably the shit back in ’94, but now, all I want for Christmas, is for anyone who enjoys this song to implode. Another thing, for some reason in my head I always thought Mariah Carey was in her 30s when this came out, so when I found out she was only in her 40’s now, I was confused. Also, how can anyone have a birthday that is in question on Wikipedia? Seriously, look at her wiki page, they don’t know her exact birthdate. How is that possible? Just tell us when you were really born Mariah. My money is that she’s actually in her 50s.

Now back to some quality music…

…and the number 1, Best Christmas song…
Run DMC – “Christmas In Hollis”
Run DMC combined two things to make a can’t miss song. 80s hip-hop and Christmas music. There was no better time in Rap/Hip-Hop than when Run DMC ruled the landscape. Songs devoted to shoes, partying, and finding Santa’s wallet while out at the park. I rarely hear this song on the radio, but I did hear it on at a store once. Instant sale.
Best Line: A million dollars in it, cold hundreds of G’s/Enough to buy a boat, matching car with ease/But I’d never steal from/Santa, ’cause that ain’t right/So I was going home to mail it back to him that night/But when I got home I bugged, ’cause under the tree/Was a letter from Santa and the dough is for me

We’ve come to the end of Part II! Did I nail all your Christmas favorites? Did I make an unforgivable mistake and forget something? Comment or Tweet using the #SparksxmasMusic, and let’s build the perfect Christmas party playlist!

Make sure you’re here tomorrow for the excting conclusion when in Part III we reveal “The Greatest Christmas Movies And Specials”! You won’t want to miss it!