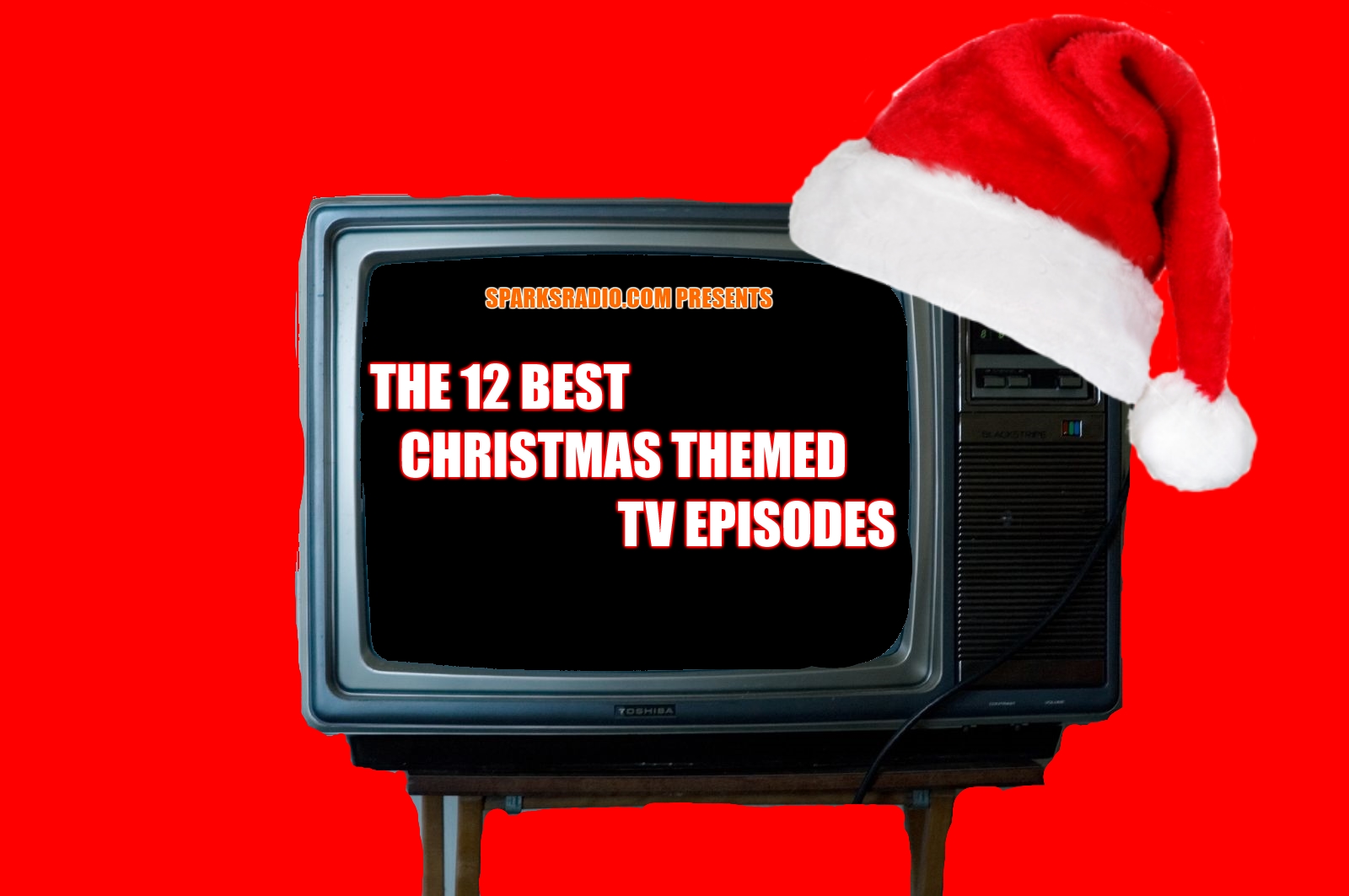 Ahh, Christmas has arrived. We sit only 3 days from Christmas, or as I refer to it, still two days left till I have to start shopping.

Since Christmas this year sits on a Thursday some of us have the few days off proceeding it (or have extended days off after). So in order to celebrate the season, we at Sparksradio.com have prepared a Christmas Trilogy of articles to prepare you for Thursday, and get you in the holiday spirit, doesn’t that just make you feel all warm inside (of course that could be a heart attack coming on as well).

This list is comprised of TV show’s Christmas episodes, meaning you won’t find Christmas specials (Charlie Brown, The Grinch, Frosty, Rudolph) as I view those as stand-alone specials/movies. Sit back, and get those TV watching eyes ready, The 12 Best Christmas Episodes…

#12. The Twilight Zone, Night Of The Meek 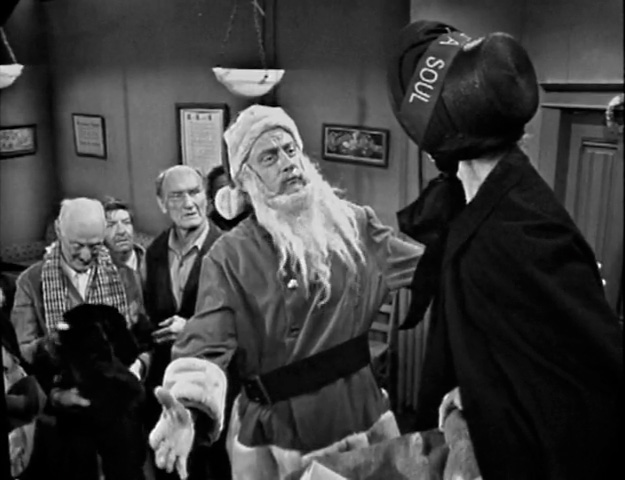 Photo Credit: NerdReactor
Everyone’s favorite creepy twist ending show offered us a Christmas episode in December of 1960. We find a drunken mall Santa (played by none other than Art Carney) tying one on at the local watering hole. After getting tossed from the bar, he stumbles around town a bit before running into some poor kids who ask for food, jobs for the parents and the likes. Santa stumbles to work and after offending some White Collar stiffs, gets fired. He then discovers a bag that much like Santa’s has the power to give out gifts, or does it? I don’t want to ruin it so check this one out.
Best Christmas Moment: Art Carney makes a great speech about rich people having everything while there are truly needy people who have nothing. It’s great and still true today.
Where You Can Watch It: Amazon Instant or Netflix, Season 2, Episode 11

#11. Scrubs, My Own Personal Jesus

Gif Credit: Rebloggy
This show is very polarizing. What I find is people truly love it, or people can’t stand it. There seems to be no middle ground or casual Scrubs fans. But everyone can get behind a solid Christmas episode no matter their opinion of the show, right? Three different stories are told during this episode, some related to Christmas, some not, but it ends with a girl who at first claimed to be a virgin giving birth in a park (I feel I’ve heard a story similar to that before). It’s worth a watch…giver a chance.
Best Christmas Moment: Turk is on call in the ER on Christmas eve, he proceeds to lose his Christmas spirit and there is a great re-write of the 12 Days Of Christmas (and a drunk who crashed into a tree).
Where You Can Watch It: Netflix, Season 1, Episode 11 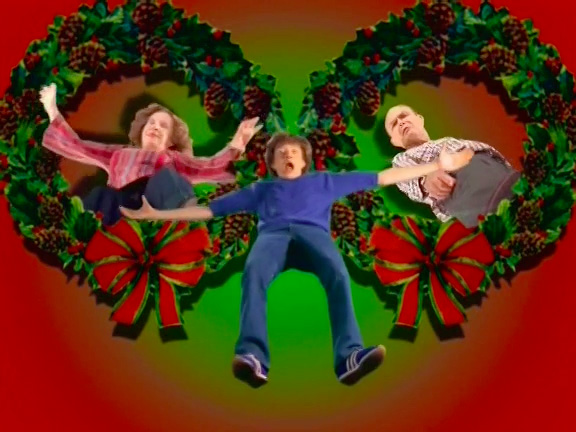 Photo Credit: 20SixFresh
Another newer show that put out a decent amount of Holiday themed episodes. This first season episode finds the gang stealing a tree, fighting over girls, and drinking spiked punch. It’s an instant classic for fans of newer TV.
Best Christmas Moment: While looking at the newly “acquired” Christmas tree, a pigeon fly’s out of it.
Where You Can Watch It: Netflix, Season 1, Episode 12

#9. How I Met Your Mother, How Lily Stole Christmas 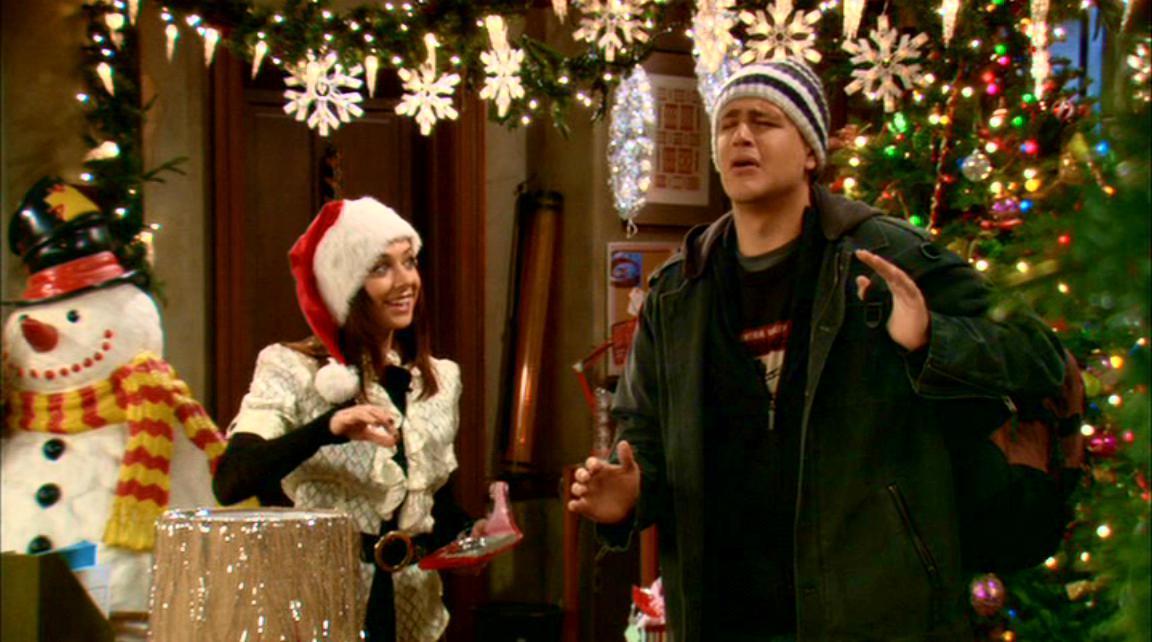 Photo Credit: FanPop
You might be reading this thinking “these are all newer shows”, but I promise we’ll start getting into classic TV soon. This episode is a great example of a newer show hitting it out of the park with a Christmas episode. I mean at this point, to come up with an original Christmas idea for TV is a thing of beauty. Everything about this episode is Christmassy, the apartment decorations, Marshall chasing the UPS truck to get Lily’s gift, caroling, and Ted’s visit to his extremely religious relatives. Oh yeah, and tackling a four letter C-word on network TV is awesome.
Best Christmas Moment:
Ted: Don’t tell your parents but I got you guys some presents.
Teds Nephew: Like the gift of God’s love?
Ted: No dude, real presents
Where You Can Watch It: Amazon Instant or Netflix, Season 2, Episode 11

#8. The Sopranos, …To Save Us All From Satan’s Power 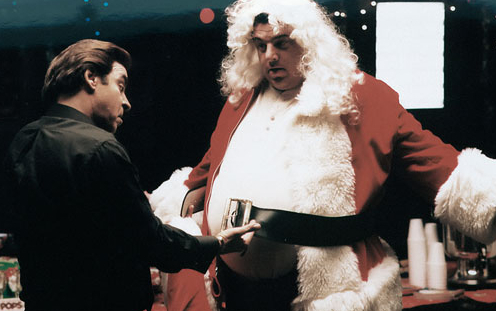 Photo Credit: TheListLove
Now we’re talkin’. Some people might forget that The Soprano’s had a Christmas episode but they did. Without spoiling it (but seriously if you haven’t watched this show yet, get to it), Tony deals with the death of a friend during the holidays. He has to choose a new Santa for the Christmas party at Satriale’s, teaches his daughter’s boyfriend a valuable lesson, and opens some gifts ‘round the Christmas tree with his family. Weirdest thing about this episode? It’s a Christmas episode that aired at the end of April.
Best Christmas Moment:
Paulie: The boss of this family told you you’re gonna be Santa Claus, you’re Santa Claus. So shut the f**k up about it.
Where You Can Watch It: Amazon Instant, Season 3, Episode 10

#7. Beavis And Butt-Head, Do Christmas 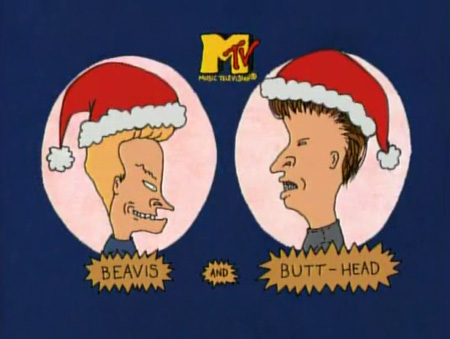 Photo Credit: ACartoonChristmas
There are two Christmas specials of Beavis and Butt-Head. One was just them watching Christmas themed music videos, while the other was Christmas themed shorts, with the clips of them watching videos added in. Either one is awesome and hilarious.
Best Christmas Moment:
Butt-Head: Hey Beavis, what is Christmas?
Beavis(in a trance): It’s the celebration of the birth of our Lord, Jesus Christ.
Butt-Head: What?
Beavis: What, I didn’t say anything Butt-Head
Where You Can Watch It: Amazon Instant (has the shorts), Volume 3, Episode 5. Otherwise, in order to not get sued YOU can find them on a place about the TUBE. 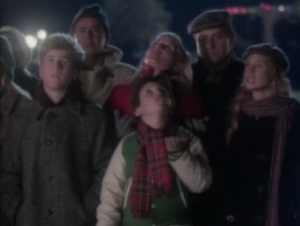 Photo Credit: EarnThis
Everyone’s favorite coming of age show puts forth a great Christmas episode capturing all the nuances of Christmas no matter what decade it may be. You have the kids trying to get Jack to buy a color TV, searching for the perfect gift for your crush, and counting down the seconds till school lets out for Christmas break. There is a great inner reflection scene, set to Joni Mitchell’s “River”, which will tie into another article this week.
Best Christmas Moment: I mean they’re all pretty good, but to me Kevin searching for that perfect gift for Winnie with only $6 is pretty awesome. I was in that situation a few times myself growing up.
Where You Can Watch It: Netflix, Season 2, Episode 3

Gif Credit: BuddyTV
Every single year The Office put out some great Christmas episodes. In fact, some of my favorite episodes of the entire series are the Christmas episodes. This first one is awkward goodness throughout. A secret Santa gift exchange brings out some of the best lines from the show, and Michael buying some Christmas spirits and getting the party going at the end is awesome! Makes me want to get a job in an office.
Best Christmas Moment: Michael running into the conference room and pointing to the ladies (and Ryan) saying “Ho, Ho, Ho, Pimp!”
Where You Can Watch It: Netflix, Season 2, Episode 10 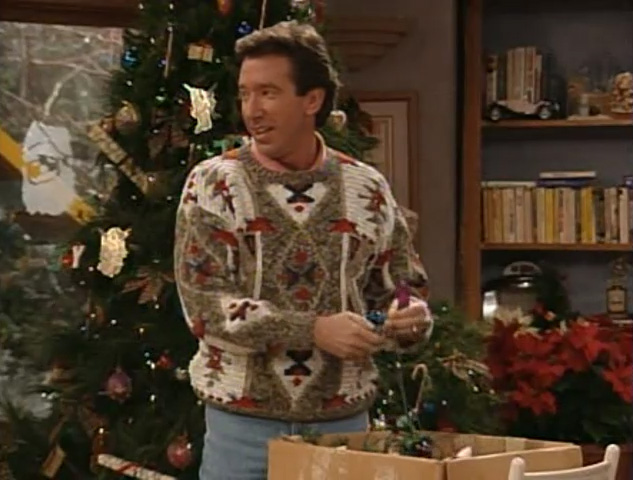 Photo Credit: RavePad
*Just look at that sweater. that’s 90s, and Christmas to a T.*
A great first season episode from this juggernaut. This episode introduces tons of Christmas themes for years to come. The annual decorating contest with the proctologist neighbor, Tim visiting the emergency room, and the Christmas pageant. The episode follows Mark being told Santa died, but in the end it appears a Santa dressed Wilson shows up to re-affirm marks faith in Santa. But is it Wilson after-all?
Best Christmas Moment: Tim saying Wilsons a great neighbor for dressing up as Santa, while Jill points out that Wilson is across the yard and waving hello.
Where You Can Watch It: Sorry this one is either on DVD, or YOU can watch it on a website about TUBEs. Season 1, Episode 12 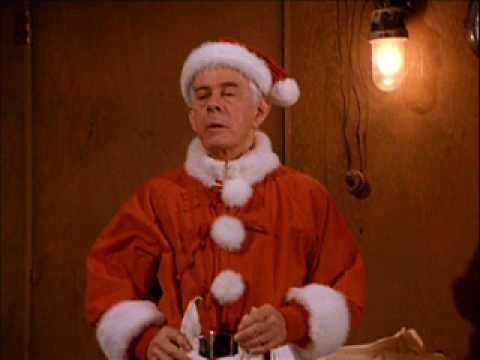 Photo Credit: YouTube
This is a classic TV Christmas for sure. I grew up in a house where my Dad worshiped MASH and it rubbed off on me because MASH is in my top 3 shows of all time. This episode finds a depressed Winchester and Father Mulcahy stuck in Korea at the holidays until Radar gives Winchester a gift that pulls both Winchester and Mulcahy out of their funk. Not ashamed to admit, tears roll big time while watching this episode.
Best Christmas Moment: Probably the climax of the episode where Winchester gets his Christmas gift and has a true “heart grew three sizes that day” moment.
Where You Can Watch It: MASH is a tough show to find, so you’ll have to borrow some DVDs, or utilize the internet. Season 7, Episode 15 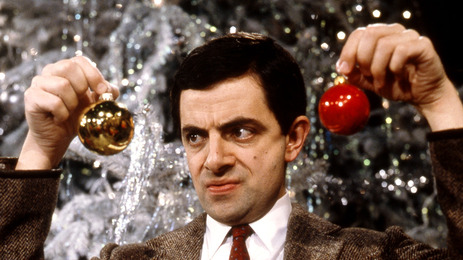 Photo Credit: Channel5
Everyone’s favorite mute comedian brings forth a classic holiday favorite. Several shorts tell the tale of how Mr. Bean gets in the holiday spirit and how he celebrates everyone’s favorite day of the year.
Best Christmas Moment: Got to be the Nativity Scene where Mr. Bean treats it more like an action figure play house than the site of Jesus’ birth.
Where You Can Watch It: Netflix just recently took down all the Mr. Bean titles for some reason, but YOU can find it where TUBEs converge.

#1. The Simpsons, Simpsons Roasting On An Open Fire

Gif Credit: Tumblr
I can honestly and with confidence say this is the first Christmas special I ever watched, and I don’t think I watched it when it aired originally, but it wasn’t’ soon after. My mother hates The Simpsons, but every year we all sit down to watch this. Homer earning extra cash as a mall Santa, adding a new member to the family, and shopping for those hard to find gifts (Maggie getting a dog toy is classic).
Best Christmas Moment: At the kids Christmas pageant a bored Homer says “How many grades does this school have?” My Dad still quotes this to this day.
Where You Can Watch It: Amazon has the episodes for $1.99 apiece. Season 1, Episode 1

That’ll do it! Did I name some of your favorites? Did I remind you of some ones you had forgotten, or maybe made a glaring error and left one of your favorites off? Comment or Tweet us using the #SparksxmasTV and let’s get some Christmas TV watching in this week!