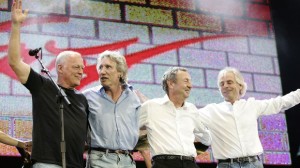 Take a deep breath and sit down. I have something important to tell you. Now that you’re ready for this news here it is… Pink Floyd will be releasing their first album in 20 years!!! Whew, that took a lot out of me.

On Saturday Polly Samson, in case you don’t know who she is, she’s the wife of David Gilmour (which by the way, you should google her, she looks amazing for her age! Polly what eye cream do you use? – Is that weird that I just asked that?) Back to it, Polly took to Twitter on Saturday and said that Pink Floyd has new music, enough for an album and it will be released THIS FALL! (Fan girl scream!)

Polly wrote, “Btw Pink Floyd album out in October is called ‘The Endless River’”, “Based on 1994 sessions is Rick Wright’s swansong and very beautiful.” Rick Wright was the keyboardist and original member of Pink Floyd but lost a battle with cancer in 2008 and died at a young age of 65.